Joep Franssens (1955) studied composition at the Royal Conservatory in The Hague and continued his studies at the Rotterdam Conservatory, where, in 1988, he concluded his study period with the Composition Prize. 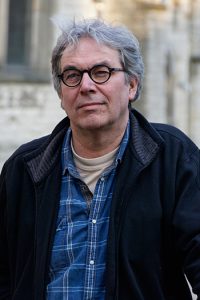 Franssens’ music has been performed globally. He has worked with choirs such as the Swedish Radio Choir, BBC Singers, Latvian National State Choir, Finnish Radio Chamber Choir and Netherlands Chamber Choir. The latter took Franssens’ music on tour through Europe and the USA in 2000 and 2001, led by the Estonian conductor Tõnu Kaljuste. Multi-laureate pianist Ralph van Raat has his music on his repertoire since 2000. The first movement of the cycle Harmony of the Spheres has been selected for the ISCM days in Maribor (Slovenia) in September 2003, performed by the BBC Singers conducted by Stephen Betteridge. In the fall of 2012 this work sees its 100th performance by Sinfonia Rotterdam and Conrad van Alphen. The complete cycle is staged again in the fall of 2014 by the Croatian Radio-Television Choir (HRT-choir) with conductor Tonči Bilić.

2015 he received the culture prize ‘Het Gouden Viooltje’ (The Golden Violin), an award earmarked for outstanding musical talent, born un the Dutch Northern provinces with an international career. He is the composer of the multi-awards winning dance-opera film Symmetry ( 2015) by Ruben van Leer.

Franssens’ music is published by Deuss Music ( managed by Albersen), The Netherlands.